skip to main | skip to sidebar

I've been thinking about my history with thrift stores today. Because I was extremely cheap and had a taste for horribly gaudy fashion in high school, I found myself in thrift stores quite often. In fact, one of my first dates with my wife was at the Salvation Army thrift store in Newbury Park, CA. In retrospect, I'm amazed she went out with me again after that.
Anyway, I started going for the polyester shirts, but soon I was spending more time looking through the records. I've you've ever looked through the records in any thrift store, you know there's not a lot to work with. Barbara Streisand, Montovani, an endless stack of Christmas records. You see the same things over and over again, but once in a while, there's a gem. I'd like to tell the story of my best thrift store find.
I've been happy with many thrift store purchases. Pop records and plaid pants have made my day on more than one occasion. I've certainly had some steals from the clothing department. Getting Munsingwear shirts or custom made jackets for $2 is always fun. Still, my favorite find would have to be a record.
If I had found this record at Amoeba Music in Hollywood, or Vintage Vinyl here in St. Louis, it would have been entirely unremarkable. But I did not find it in a record store. I found it in Luther's Attic in Moorpark, California. Luther's Attic is a tiny little store on High Street in Old Town Moorpark. This stretch of High Street is notable, because none of the stores or restaurants ever seem to be open. I had wandered over after dropping Sarah off at the train station, I think, and indeed, Luther's Attic was the only thing open. Its wares fell mostly in the bric-a-brac category, with lots of decorative objects shaped like hearts or geese. For some reason, I still decided to look through the records.
And I looked through all the records. There were actually some promising signs along the way. There were some half decent rock groups and one or two ECM records. That alone already made it an atypical and worthwhile trip. But about two thirds of the way through, I saw something with cover art decidedly different than the usual orchestral works or Persuasive Percussion records. It was 80° Below '82, a record by Air, a Chicago experimental jazz group. There's not a whole lot to say about it, other than that it's good, and somewhat rare. It's not that the record was particularly remarkable, but after sifting through thousands of dusty, smelly, and just plain bad records, I felt like I had found a Stradivarius in someone's barn.
I walked out of Luther's Attic happy, and drove home from Moorpark trying to envision the music I was about to hear.
Posted by Chris Bulock at 6/20/2011 08:01:00 PM No comments:

Getting in to the music

When Harvey Pekar recently passed away, I read an interview he did for the Atlantic. One thing in particular really resonated with me. It was the way he started to get into jazz:
"I was 16 years old and I was just flailing around, looking for an interest. I heard, you know, these jazz records. They were modern records, at the time in the '50s, and I realized that I didn't fully get what was going on. But I liked a lot of what I heard. What I felt was, if I listen to this stuff enough, I could train my ear so I could hear what was going on."
It reminded me of the first time I heard an Ornette Coleman record. I had started listening to my dad's jazz CD's in high school, and he had certainly been encouraging. When he gave me a copy of the Penguin Guide to Jazz on CD, I started randomly flipping through it and heading to the library and record store. Anything that sounded interesting, I would pursue. I found some albums I liked, and some I didn't, but I felt like I could at least follow all of it.
Then I bought a copy of Free Jazz. I really had no idea what to expect. When I heard it, it was really confusing at first. I wasn't familiar with anyone in the band except Dolphy, so I had a lot of trouble separating everyone out in the double quartet. I had never heard any collective improvisation before, and this was definitely not the post-bop I was used to. I found it kind of boggling and set it aside for a while.
I kept going back to the library, listening to new things. I got into some smaller groups playing free. After a few months, I thought I'd try out the Coleman album again. I was amazed at how much more I heard. Not only did it make more sense, but I really liked it. I definitely wanted to have that experience again. It got me hooked on stretching farther out.
Posted by Chris Bulock at 7/20/2010 06:37:00 PM No comments:

During the enormous fire here, the LA Times reminds us that brush and buildings are not the only things to burn:

Last night I went to the Hammer Museum to see Mary Halvorson perform. While I really enjoyed her latest album, and her playing is quite good, I must confess that I was more interested in her drummer. Ches Smith, who's playing in her trio these days, is certainly versatile. I've seen him play in two different guitar trios, as a duo with Devin Hoff called Good for Cows, and on solo percussion. He's also played with Marc Ribot's Ceramic Dog (one of Ribot's heavier groups), Xiu Xiu, and Mr. Bungle. I always make a point of seeing him when he's in town, in part because he's played some of the best drum solos I've ever heard, and in part because he's so fun to watch. This is most true of his solo performances; you get a visual sense of the multiple possibilities he's mulling over. He'll often make 3/4 of a gesture and then pull back, deciding on silence instead. It really draws me into his playing.

On a side note, the Larry Johnson exhibition at the Hammer is definitely worth seeing. I'm still digesting some of it, particularly the different types of pieces incorporating text. In many cases, it would be more appropriate to say "consisting solely of text." It's interesting to think what the role is of the text's original semantics when the words are the primary visual element in a piece.
Posted by Chris Bulock at 8/07/2009 10:26:00 AM No comments:

Music and Movies in Eagle Rock

For about four years now, I've been sporadically attending a monthly series of shows at the Eagle Rock Center for the Arts. They're put on by Will Salmon and feature a sort of rotating cast of LA area musicians. I don't know what to say genre-wise: jazz, folk, rock, experimental. Often improvised, but not always. It's nice to have a consistently good series like this, and so close to home. Recently, Will Salmon started a new series in the same venue. The music series runs the first Sunday of every month, and the new series (silent movies with original scores performed live) is on the third Sunday. I went last night and was happy to see a great turnout. The music-only shows normally get a crowd of under 20, but this must have been over 50. Nels Cline and Carla Bozulich (as Scarnella) played a really great score that transformed "Laugh Clown, Laugh" in an interesting way. But the opener may have stolen the show. A man in a bunny suit (Bob Bruno) played electronic music with a drum pad that really took advantage of the big echo-y space. These shows are only $5, so check it out some time.
Posted by Chris Bulock at 5/18/2009 11:28:00 AM No comments: 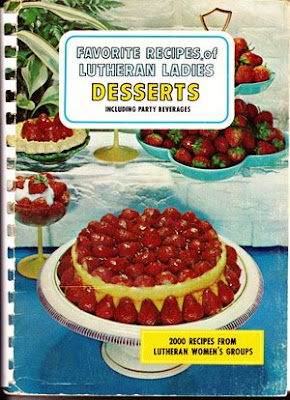 This is a cookbook of my mom's. While I do come from Midwestern Lutheran stock, I'm glad to say that I haven't seen most of the the horrible things suspended in Jello that this book recommends.
Posted by Chris Bulock at 5/04/2009 10:05:00 PM No comments:

A couple weeks ago, I was in the laundry room when a neighbor walked by the window and asked for change. I didn't have any, but she stuck around for a couple minutes and introduced herself. Despite the fact that we've lived in the same building for a couple years, we had never met before. She seemed very friendly. Yet, I've walked past her twice since then and attempted a greeting to no avail. I guess that's why we had never really met before: it was simply the first time she had needed quarters from me.
Posted by Chris Bulock at 4/30/2009 12:25:00 PM 1 comment: